Here at the Albumen Works we recently had the opportunity to produce a set of platinum prints for Richard Cartwright, a professional on-set photographer working in the motion picture industry in Hollywood.

Using a Leica M monochrome digital camera to make several portraits of the actor Peter Mensah (300, Avatar, True Blood) Cartwright sought to marry the technological sophistication of the digital age with a handcrafted 19th century printing aesthetic that celebrated the object as well as the image. To this end he approached CAW to have his vision translated into platinum/palladium prints. 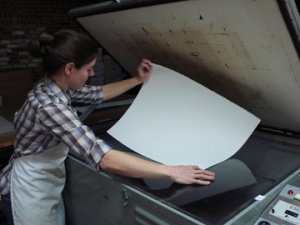 Emily positions the coated paper over the negative.

Each print is hand developed in trays.

From digital files Emily Wagner Phoenix produced large format film negatives on the LVT image recorder; then hand coated the paper with the sensitizer that produces the subtle tones that platinum and palladium prints are prized for. 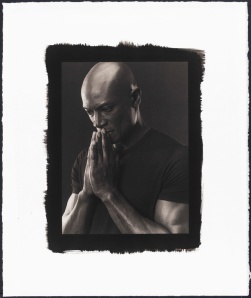 An effective and beautiful combination of 19th, 20th and 21st century photographic technologies; these archival, handmade prints lend a timelessness and depth to these portraits made with the precision optics and imaging technology of a state-of-the-art digital camera.

Founded in Chicago in 1976 by Doug Munson and Joel Snyder, CAW moved to the Berkshire Hills of western Massachusetts in 1982. The Chicago Albumen Works puts decades of experience to work for some of the finest collections from around the world. A combination of technical expertise and historical perspective, operating in a controlled, conservation environment, directs our solutions to the diverse challenges presented by photograph collections. At CAW, the synergy of technical understanding, a conservator’s approach, an artist’s eye and a historian’s perspective creates a unique, productive, and collegial environment.
View all posts by albumenworks →
This entry was posted in Digital Negatives, Platinum Printing, Traditional Printing and tagged 19th century processes, Alternative process, Black and white LVT negatives, Digital negatives, Digital negatives for alternative process printing, Digital negatives for traditional printing, lvt negatives, platinum printing, platinum/palladium printing. Bookmark the permalink.